One-Row Form
The composition is created with the three principal stems arrayed in a row with an interesting sense of rhythmic variations in the height and spacing of elements.It may be created in both a multisided version and a version to be viewed from the front.

Circular Form
The three principal stems are inserted at different points along the circumference of a circle, or in such a way that they evoke toe apperarance of a circle. They are composed to point outward, producing a concentric circular or spiral sense of movement

Radial Form
The Subject and the Secondary extend the right and left respectively, and the Object is positioned in the center. 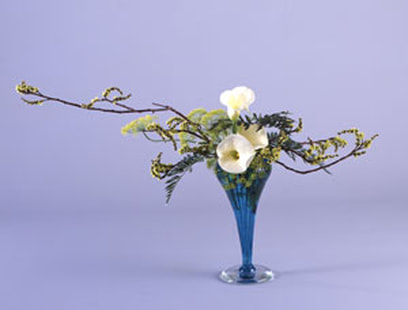 Combined Form (Yosooi)
A tall vase is placed inside a low, wide bow, and forms of Hana-isho are freely combined, one in the vase above and the other in the bowl below. 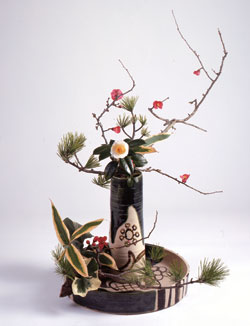